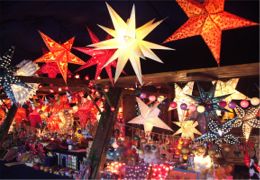 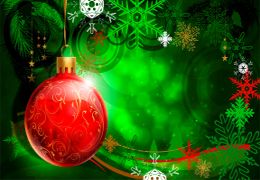 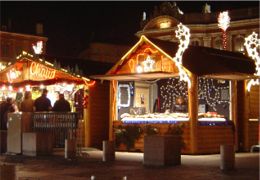 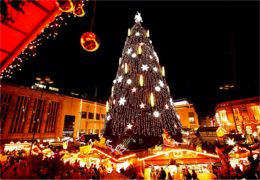 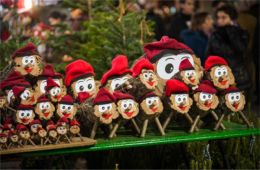 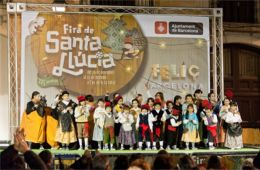 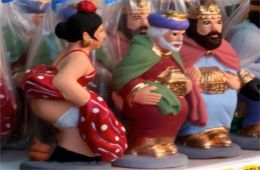 Christmas in Barcelona is great fun! The weather is cold, but not freezing. So, you can walk under the Christmas lights and enjoy the Christmas atmosphere of Barcelona. Dating from 1786, this traditional Christmas fair has expanded to more than 300 stalls selling all manner of handcrafted Christmas decorations and gifts, along with mistletoe, poinsettias and Christmas trees.

A very popular and traditional figurine placed in nativity scenes is "el Caganer" (the pooper). El Caganer is the cheeky figure of Catalan navitivy scenes(he may be in the background, underneath a bridge, near a haystack,etc). The original El Caganer is an elf or gnome-like figurine, who wears the traditional Catalan "barretina" red beret and and has his trousers down, his backside bare and is defecating! Very naughty little fellow! You can buy a Caganer figure in most souvenir shops in the city centre and at the Christmas markets of Barcelona. In recent years the popularity of El Caganer has spread and there are now undreds of caganer figures with new ones being added every year. The practice is tolerated by the Catholic church within the areas where the Caganer is popular. Although the tradition generally has popular support, opinion is divided as to whether it is wholly appropriate and not all nativity scenes in Catalonia include caganers.

It is also a place to buy your Christmas Caga Tio (a smiley face log that you will find in Catalan homes from the Feast of the Immaculate Conception until Christmas Eve. Catalan children receive their gifts and treats not from Santa Claus, but rather from El Tió)

There is also a section of the market named 'Artesania'. Within this section there are a wide range of stalls selling various hand-made and artisan products such as jewellery, toys, leather goods and ornaments.

Berlin
All Christmas Markets
Berlin could easily be described as the capital of the Traditional Christmas Market, if judged on quantity alone - it has over fifty across the city every year. 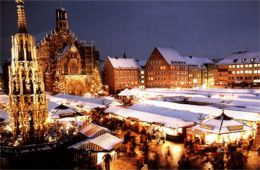 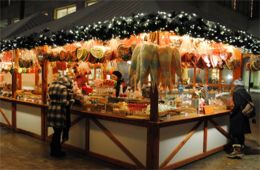 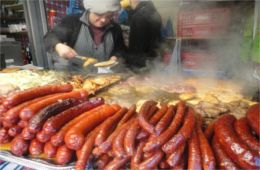 The market at Kaiser Wilhelm Gedächtniskirche is the biggest and most popular receiving around 2 million visitors each year who come to peruse the jewellery, decorations and artwork on sale as well to indulge in the more clichéd seasonal pleasures such as chestnuts and mulled wine. 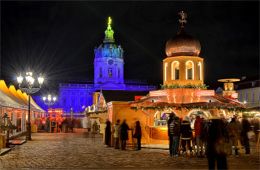 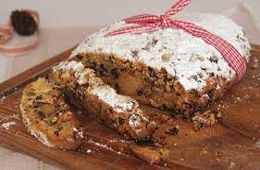 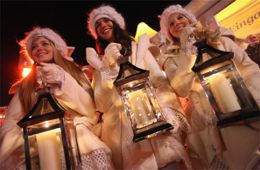 Romantic grandeur best describes the Christmas market at the Charlottenburg Castle (Schloss). Even from a distance the market glows invitingly, as the twinkling Christmas trees frame the colorfully decked out royal palace. Crowded with merrymakers of every age meandering along the rows of wooden huts and rustic cabins, the palace’s usually uneventful front lawn transforms into a small alpine village of Christmas fantasy.

You’ll be spoiled for choice with entertainment options: permanent and temporary exhibitions inside the castle (There is one area that is not wheelchair accessible but the rest of the palace is), a Ferris wheel, and live music from accordionists, carolling choirs and even the traditional Berlin barrel-organ. With over 150 stalls nestled inside heated tents and elegant glass pagodas, you’ll find every holiday culinary staple (gluehwein, of course + stollen are my favorite) and an overflowing haven of trinkets and handicrafts. This market is particularly child-friendly, with a separate children’s market, replete with its own Ferris wheel, swing carousel, and petting zoo.

Copenhagen
All Christmas Markets
Copenhagen is a Christmas city, not just because Greenland (formerly a province of Denmark) is the home of the 'Julemand' (Santa) and Denmark the home of the Christmas stamp but because this holiday is the most eagerly anticipated by all Danes who have passed down its simple pleasures and traditions from generation to generation.

The picturesque canal filled with moored sailing boats will be full of yuletide with a Christmas Market, booths selling souvenirs, apple dumplings, glögg and foods. Another traditional market is in the Grey Hall at Christiania, the alternative hippie district. Unusual and unique handmade products are on sale for a ten day period in the middle of December. 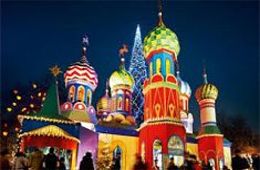 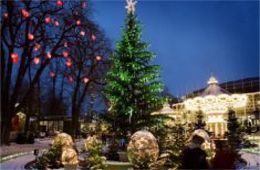 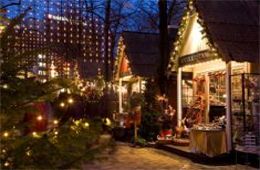 In Tivoli, walkways greet you with gaily painted stalls selling small gift items and souvenirs (your best bets are the Danish handicrafts and foods). Pony rides and other amusements are available for children and you can admire a colourful light show on a part of the Tivoli Lake. The atmosphere is much like that of a small carnival, filled with the pungent smells of funnel cakes and glögg and the strains of familiar holiday songs. Linger over a traditional meal or indulge in a quick pick-me-up at one of its restaurants.

Tivoli Hotel
Copenhagen, Denmark
From £599 per person 3 nights
Bed & Brakfast
A stay at this luxury hotel with all of the latest, state-of-the-art amenities is a fairytale in itself. Plan a romantic weekend, or bring the whole family to enjoy our modern luxury facilities.

France
All Christmas Markets
Christmas Markets in France otherwise known as marché de noël, provide a great opportunity for a winter weekend break. They exude a fantastic atmosphere and offer great shopping opportunities but with a Gallic flavour - not to mention replenishing wine stocks for the Christmas season. Our list of markets provides just a cross-section. Most towns and cities host a French Christmas Market at some point between late November and the end of December.

These French Xmas markets include a one in Paris and one in Lille both of which are particularly popular because of the fast Eurostar connection ideal for travellers who have concerns bout flying with a disability. 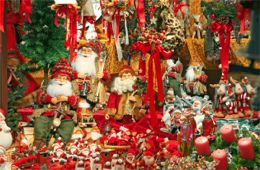 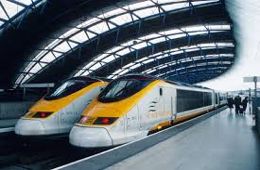 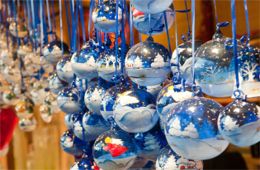 In the heart of winter, the entire city of Lille sparkles and glows with "joie de vivre"! With the wave of a magic wand, the city takes on a festive atmosphere and welcomes you to its winter wonderland. Be dazzled by hundreds of twinkling lights.

Christmas carols fill the air as the 50-metre high Big Wheel turns majestically, providing a fantastic view over the whole city. At its base, an artificial snow-covered village fills the entire Grand Place square, dominated by an 18-metre high Christmas tree!

Head towards Place Rihour where the trees are lined with twinkling fairy lights, the irresistible aroma of cinnamon and roasted chestnuts fill the air and an array of over 83 Christmas wodden chalets awaits you.

Novotel Lille Centre Grand Place
Lille, France
From £425 per person 3 nights
Room Only
2 People sharing
Discover the young and cultural city of Lille, whose Flemish influence can be seen not only in its architecture but also in the irrepressibly cheerful nature of its residents. 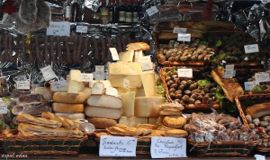 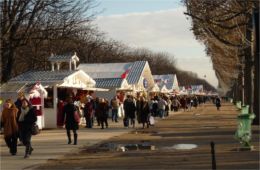 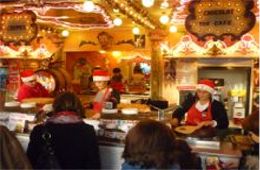 In December and January, the Avenue of the Champs-Elysées puts its Noel's colors. In the lower part of the Champs-Elysées welcomes the Christmas market. 160 chalets settle down between the Rond Point des Champs and the place de la Concorde. It's the place to make small purchases and to eat quickly a waffle, a crèpes, or a glass of mulled wine (vin chaud). there.

In Paris, the most popular Christmas lights are those decorating the Champs Elysées; but they are just the icing on the cake. The streets and the big shops in all the shopping areas, notably the department stores such as Printemps and Galeries Lafayette, in the Boulevard Haussmann area, vie with each other to produce the most elaborate Christmas decorations and Christmas windows.

Mercure Paris Gare Montparnasse
Paris, France
From £599 per person 3 nights
Bed & Breakfast
2 People sharing
A modern hotel in the heart of Paris's Montparnasse neighborhood. This is where Picasso and Sartre once lived. You'll find plenty of restaurants and patisseries here too.

Prague
All Christmas Markets
Christmas markets (Vanocni trh) are a key ingredient of the festive magic in the Czech Republic. And the Prague Christmas markets are the country's most impressive, lighting up the city, bringing locals and tourists together to share in the spirit in a 'winter wonderland' setting.

The main Christmas markets are held at the Old Town Square and Wenceslas Square (5 minutes walk from each other). There is also a smaller market at Republic Square and a permanent one at Havel's Market. 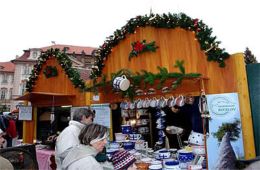 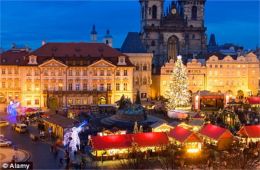 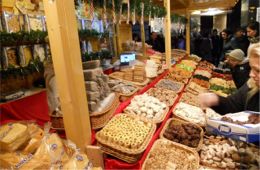 The Old Town Square dates from the 12th century and started life as the central marketplace for Prague. Over the centuries buildings of Romanesque, Baroque and Gothic styles were erected around the market, each bringing with them stories of wealthy merchants and political intrigue. To fully appreciate the beauty of the Old Town Square, sit back and soak up the atmosphere over a coffee or a cool beer at one of the pavement cafés lining the square.

Hotel Atlantic
Prague, Czech Republic
From £425 per person 7 nights
Bed and Breakfast
2 People sharing
The ground floor of the Hotel Atlantic has a cozy lobby bar, a winter garden with a billiard and a restaurant Fiesta opened daily for a breakfast and lunch.
Mobility Equipment Hire Direct 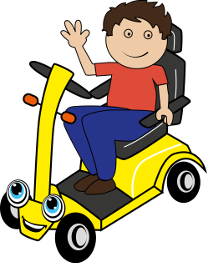